A high warning has been issued for Rawalpindi by the Punjab provincial home department in advance of the entrance of the PTI long march.

The district administration, police, law enforcement organisations, and hospitals have been requested by the provincial home department to remain on high alert and take preventative action before the protest march.

In order to guarantee impenetrable protection of sensitive facilities and buildings, a letter comprising advice and recommendations has been addressed to the police department and the relevant authorities.

Law enforcement agencies have been told to safeguard the safety of the march route and station officers close to all significant structures.

The march route will be watched over by Special Branch.

Monitoring of prohibited organisations has been delegated to the Counter Terrorism Department.

An information sharing hub has been established at the assistant commissioner’s (headquarters) office in the meantime.

When the protesters cross the boundaries of Rawalpindi, the assistant commissioner Gujjar Khan has been tasked with setting up medical facilities.

The protesters arriving from Khyber-Pakhtunkhwa will have access to medical services thanks to an order given to assistant commissioner Taxila.

It has been mandated that the Chief Traffic Officer in Rawalpindi create a traffic strategy and enforce it for the marchers.

Before the protesters enter Rawalpindi, the Civil Defense Department is to set up the bomb disposal squad truck.

Additionally, it has been requested that all three of Rawalpindi’s associated hospitals continue to be on high alert to handle emergencies.

It has been requested that Rescue 1122 Rawalpindi stay on full alert till the finish of the long march.

According to sources, it was also suggested that more security officers be sent to safeguard the march’s path.

As during the long march, protection at the Islamabad International Airport, Noor Khan Airbase, and Sehala Oil Depot would be boosted.

The local PTI leadership and staff have finished making ready to greet the marchers in the meantime.

Welcome banners have been hung along Murree Road and other major thoroughfares.

Despite a restriction, huge banners and panafelx images have been strung along the metro bus track’s pillars.

Next Monday, the PTI marchers are anticipated to reach Rawalpindi through Rawat T-Chowk.

To greet the march supporters, more than 20 camps would be set up between Liaquat Bagh Chowk and Faizabad Junction.

The PTI leaders said that there was no resistance from the district government and that everything was proceeding as planned.

Fayyazul Hasan Chauhan, a spokeswoman for the Punjab administration, earlier stated that receiving camps have begun to be put up on Murree Road to greet the long marchers.

In District Kachheri Chowk, a welcoming camp will be held for attorneys.

The current leadership in Rawalpindi has made large orders for rice, korma, and naan to greet the Pakistan Tehreek-e-Insaf long march marchers, which has resulted in a surge in the food and catering industry. 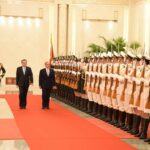