Azam Swati, a senator for the Pakistan Tehreek-e-Insaf (PTI), described the “torture” he allegedly received at the hands of the Federal Investigation Agency on Tuesday (FIA).

These statements were made by Swati, who was arrested by the FIA cybercrime squad on October 13 for making “controversial claims” against government entities, including the army chief.

Imran Khan, the leader of the Pakistan Tehreek-e-Insaf, described the torture of Swati as illegal and stressed that an elderly man was tortured in front of his grandchildren for “a crime of criticising the institution,” adding that the event has damaged Pakistan’s reputation.

During his press conference, Swati requested Gen. Qamar Bajwa, the Chief of Army Staff (COAS), to uphold the Constitution and summon Ayaz Khan, the assistant director of the FIA’s cybercrime cell. The COAS has 27 days left at the army general headquarters (GHQ).

The senator said that while he was being tortured, the FIA official was present and driving the car.

To find out who was laughing while he was being tortured, he requested that all those in attendance have their phones examined for any video footage of his torture.

He said, “Someone videotaped the entire event while I screamed, they covered my head and kept hitting me.”

The senator said that after being physically tortured and forced to strip naked, he was driven to an unknown location. 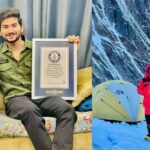