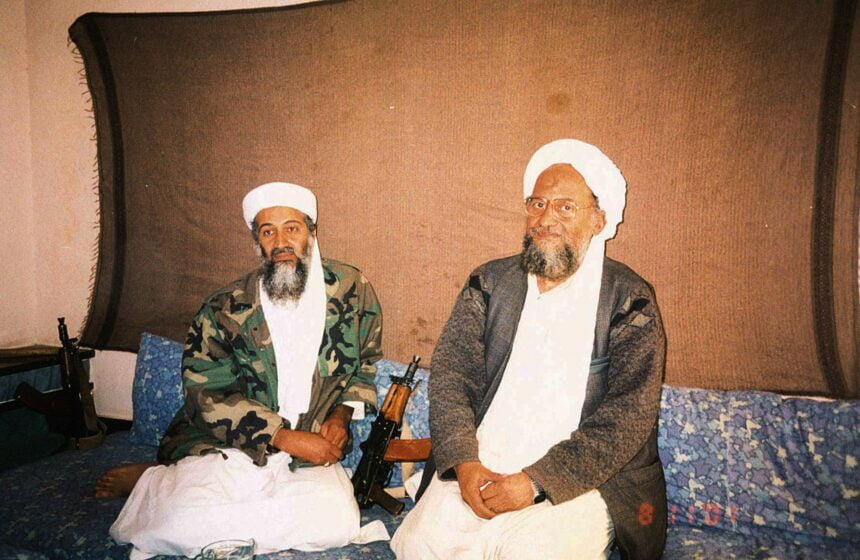 Al-Qaida leader Ayman al-Zawahiri was assassinated in the territory of Central Kabul by a missile (reported to be R9X Hellfire) fired by a drone led by MQ9 Reaper unnamed aerial vehicle which did not include any US citizens confirmed by the US Central Intelligence Agency on July 31 2022 (local time: 6:00 A.M)

After 9/11, the US Military chased Usama Bin Laden and reportedly killed him in an operation in Pakistan in October 2011.

Ayman Mohammed Rabie al-Zawahiri, born on June 19, 1951, was an Egyptian and had a bachelor’s degree in Medicine and a master’s in Surgery from Cairo University. He merged the Egyptian Islamic Jihad with Al Qaeda in the year 2001 and became a deputy to Usama Bin Laden in 2004. After the death of Usama in 2011 he became the successor and served as an Emir of Al Qaeda till his death.

In Pakistan, he is reported to have been involved in the attacks on the Egyptian embassy situated in Islamabad. In 1995 these attacks were claimed by the Egyptian Islamic Jihadis but were later denied by Usama. He is also regarded as the person who was directing the Lal Masjid operation in Pakistan, July 2007. For this project, code name “Operation Silence” was decided. According to Pakistan Army and the special services groups, the letters of Al Zawahiri were found in the operation area which he wrote to Abdul Rashid Ghazi and Abdul Aziz Ghazi (preacher of Lal Masjid, Islamabad, Pakistan). Al Zawahiri was also allegedly involved in the killing of the Former Prime Minister of Pakistan Benazir Bhutto on 27 December 2007.

According to the States he had been coordinating with Usama in the September 11 attacks, killing nearly 3000 people. The States announced a bounty of $25 million for any information regarding him which may lead to his capture.

On Monday August 1, 2022, President of the United States claimed that the US missile killed one of the world’s most wanted terrorists and also claimed that “Now, justice has been delivered.”

The news regarding the death of Al Zawahiri was confirmed by the Taliban Government an hour after the attack yet the body has not been discovered because the drone had destroyed everything. The attack was condemned by the present Government of the Taliban.

However, after almost a month Afghan Taliban’s acting Minister of Defense Mullah Mohammad Yaqoob, while attending a ceremony celebrating the takeover of Kabul by the Afghan Government, directly accused Pakistan for aiding the US drone in Afghanistan. He accused Pakistan of providing the Airspace to US drones to directly attack Afghanistan. However, further, he said that:

“The airspace violations can not be tracked as most of the radar systems of Afghanistan are destroyed by the US Military.”

“According to the information of the Afghan government, the drones have been entering their country from Pakistan.”

However, these allegations have been denied by the Pakistani authorities. Asim Iftikhar Ahmad, a spokesperson of the foreign ministry claimed that:

“In the lack of any evidence, such allegations are unfortunate.”

The Afghan Taliban government has no proof against Pakistan but such allegations can serve to fuel the tensions and rift between Pakistan & Afghanistan.

Some previous media reports of the US Media also claimed that the drone responsible for killing the Al Qaeda leader was launched from the airbase of Ganci using the airspace of Kyrgyzstan located at the area of Manas (situated in northern Kyrgyzstan) however the exact route of the drone is still not disclosed officially by the US Government.

According to the previous official statements of Pakistan:

“Pakistan condemns terrorism in all forms and manifestations and the sacrifices of the country against terrorism are also well known by the world.“

However, from the US attack in Afghanistan, it can be concluded that the terror problems between the two countries Afghanistan and USA have still remain unresolved.