Shaheen Shah Afridi, a Pakistani pacer, revealed on Sunday that he had undergone an appendectomy.

In a tweet, the star player informed his followers that he will be undergoing the medical procedure, which involves the removal of the appendix. But he said that after the surgery, he was feeling better.

“Today I had an appendectomy, but, thank God, I feel better. Please keep me in your prayers,” Shaheen appealed to his fans to remember him in their prayers.

According to the Pakistan Cricket Board on November 14, Shaheen had previously been given a two-week rehabilitation advice.

The PCB announced on Monday that the scan performed on Monday morning before the team’s departure for Pakistan had revealed no signs of an injury and that the knee discomfort was probably caused by a forced knee flexion on landing.

“The scans were discussed by Australian knee expert Dr Peter D’Alessandro and PCB Chief Medical Officer Dr Najeebullah Soomro, and it was reassuring to hear there was no injury. The left-arm fast bowler is better,” it was added.

The PCB has also stated that the medical experts would decide when the left-arm bowler may return to the cricket field.

According to Kaira, the party will support the PM’s choice for the next COAS
Next Article 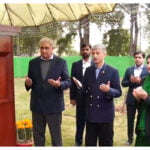