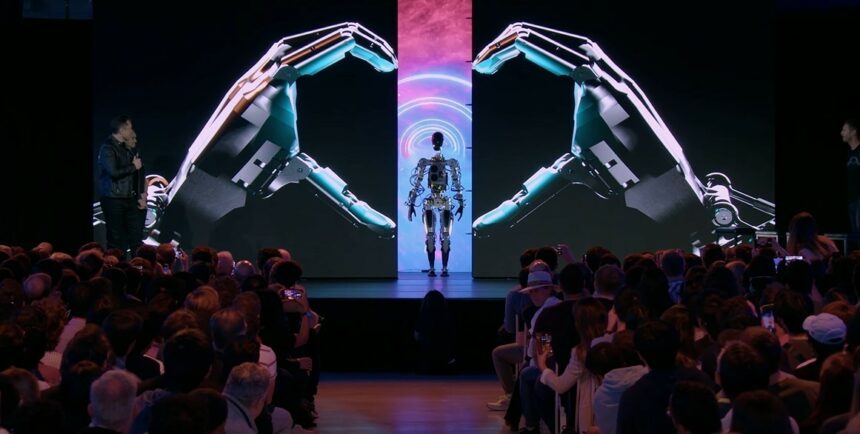 Elon Musk, the CEO of Tesla, announced the company’s intention to create a working robot prototype by 2022 last year. The only thing we received was a bodysuit-clad dancer and the promise of advancement. The first examples of that development were displayed on AI Day 2022.

Every year, Tesla has an event called AI Day where it displays cutting-edge technology and outlines its development strategy. For any Tesla enthusiast, the technological demos are a major draw, but the event’s main goals are to recruit new employees for Tesla and support the business’s expanding technology portfolio. The focus of this year’s presentation was on Tesla’s robotics initiatives and full self-driving (FSD) developments.

The presentation began with a look at Bumble C, the latest version of Tesla’s prototype robot, in contrast to Musk’s first announcement in 2021. The robot serves as the basis for Tesla’s intended production iteration known as Optimus, which slowly walked the stage to show the spectators the company’s advancement. Within six months of the company’s first launch, the Bumble C prototype, according to Musk, was built and functional.

There’s an excellent reason to assume that a successful Tesla robots program isn’t a matter of “if,” but rather “when,” even though the Boston Dynamics team may not have much to worry about just now. This is because of the company’s track record of delivering innovation in the aerospace and EV markets. Several of the prototype’s existing and future characteristics were emphasized in the Optimus presentation. A 2.3 kWh battery that is situated in the robot’s torso powers the 73 kilograms (160 lb) device. The single PCB of the pack contains all of the integrated circuits necessary to control power sensing, distribution, and charging.

The battery pack also supplies power to the bot’s system on a chip (SoC), which is based on Tesla and handles functions including visual processing, audio and communication, real-time decision-making, and device security. Tesla created physical designs to prevent damage to these vital components by simulating crashes, gathering data, and using its vehicle crash simulation technologies. Other features discussed in the presentation were the bot’s hands and navigation skills. For highly dexterous grabbing, gripping, and item handling, Optimus will have five fingers and an opposable thumb on each hand. The hardware and software for visual navigation are built on the same platform as Tesla’s self-driving vehicles. The bot’s ability to manipulate objects and navigate was demonstrated several times during the AI Day presentation.

Later, the presentation’s focus turned from robotics to Tesla’s Full Self-Driving (FSD) technology, another popular subject. The presentation focused on several FSD-related developments and upgrades, including the system’s AI-based decision-making capabilities, aspects impacting the system’s 3D mapping, video model training improvements, and problems with the FSD’s Lane Networks feature. According to the team, the program’s user base increased from 2,000 users in 2021 to over 160,000 users in 2022.

Tesla’s efforts to draw in new talent will be crucial to the corporation achieving its objectives in the upcoming years. Musk claims that he intends to produce a usable humanoid robot as soon as feasible utilizing the same design, development, and manufacturing methods as their line of electric vehicles. If successful, this would lead to the development of a mass-produced, low-cost, high-volume, and highly reliable robot that could be bought by customers for less than $20,000.