In a remarkable diplomatic achievement that might increase natural gas production in the Mediterranean before the start of the European winter, Israel and Lebanon are believed to have reached an agreement in their dispute over gas fields and the maritime boundary between the two countries.

Israel’s prime minister, Yair Lapid, announced on Tuesday that months of negotiations, brokered by the US, had produced a “historic agreement” between the two nations, which had officially been at war ever since Israel’s establishment in 1948. He said that the agreement will “increase Israel’s security, invest billions into the country’s economy, and guarantee the stability of our northern border.”

The most recent version of the proposal “satisfies Lebanon, meets its demands, and preserves its rights to its natural resources,” according to a statement from the office of the president of Lebanon, Michel Aoun. The statement also stated that more consultations would be held before an official announcement.

With the Tanin field nearby, the Karish maritime reservoir is projected to store up to 2-3 trillion cubic feet of natural gas and 44 million barrels of liquids. The deal is anticipated to permit Israeli production of natural gas from these reserves. A portion of the Karish field had previously been claimed by Lebanon.

As the invasion of Ukraine has caused energy prices to soar and forced Europe to search for alternatives to Russian oil and gas, the resumption of Karish production, despite its modest size in terms of world output, is a positive step for Israel’s western allies.

The neighboring promising field, Qana, is said to have the promise of giving Lebanon, which is stuck in a severe economic crisis, a billion-dollar financial lifeline. The French oil giant TotalEnergies sent a group to Beirut on Tuesday to discuss current gas development.

The border issue has been the subject of negotiations since 2020, but they have encountered several roadblocks, including Israel receiving threats from the influential Shia movement in Lebanon, Hezbollah, warning against removing its forces from Karish until the agreement was finalized.

Hezbollah launched unarmed drones at an Israeli production vessel near Karish over the summer, but the Israel Defense Forces shot them down. The production vessel was an Energean manufacturing ship with a London-listed stock exchange.

The US energy envoy Amos Hochstein, Washington’s principal mediator, presented a final draft last week, but Israel announced last week that it planned to reject Lebanon’s suggested revisions. This put a stop to progress toward a deal.

But under pressure to agree before Aoun’s interim presidency ends on October 31 and before Israel has elections on November 1, negotiators were able to present a modified plan on Monday night that was acceptable to all parties.

Of course, there was a compromise on both sides. By implication, the agreement may be a bit more limited than I had hoped, but it is nevertheless highly significant. Even the possibility of a genuine shift in the two nations’ relationship is encouraged.

In the end, Hezbollah has decided to get on board; it seems they realized they can’t be the spoiler in the talks given the urgent economic situation in Lebanon.

This week, the caretaker government of Israel will be presented with the agreement’s final version for approval.

As a result of Europe significantly lowering its reliance on Russian energy, Israeli gas output has increased by 22% thus far this year.

Since 2020, Israel has been shipping gas from an offshore field to Egypt for liquefaction before shipping it to the EU. A deal to invest in infrastructure to increase exports to the bloc was reached by the three parties in June. 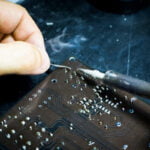 Chip shortage: After the US placed sanctions against China, Asian chipmaker shares plunge by 8.3%
Next Article