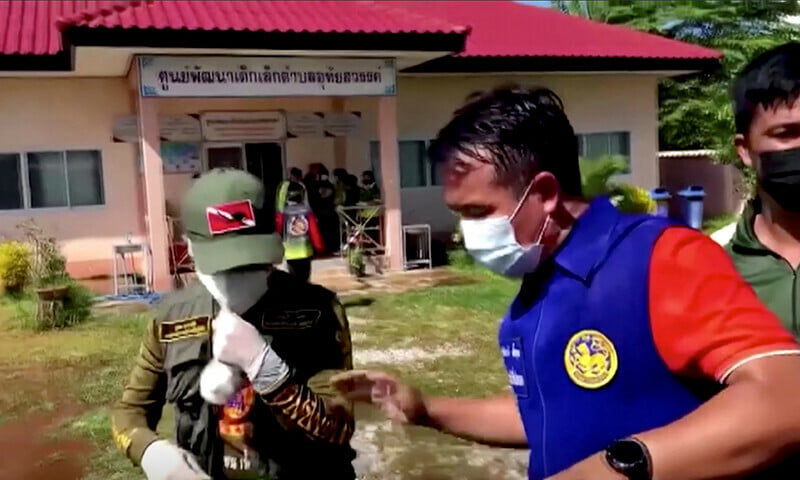 In this image grab from a video taken on October 6, 2022, officials and authorities watch over a childcare center's gate as people wait after a mass shooting in Uthai Sawan, Nong Bua Lamphu Province, Thailand. Image Credits: AFP

On Thursday, a former police officer stormed a nursery in northeast Thailand armed with a gun and a knife, murdering at least 30 people, including children, before killing himself and his family, according to authorities.

At around 12:30 pm (0530 GMT), the assailant, who was carrying a shotgun, a handgun, and a knife, started shooting at the daycare center in Nong Bua Lam Phu province before driving away, according to the police.

At least 30 people have died as a result of the shooting, according to Anucha Burapachaisri, a spokesperson for the Thai prime minister’s office.

Panya Khamrab, a police lieutenant colonel who was allegedly fired from the force last year for drug addiction, was identified as the killer by police colonel Jakkapat Vijitraithaya of the province where the incident took place.

According to Jakkapat, the fatalities included 23 toddlers and preschoolers.

A serving army officer shot dead two colleagues at a military training base in Bangkok less than a month ago. Mass shootings are extremely uncommon in Thailand, despite the country’s high gun ownership rates.

However, the Bangkok Post reports that there have been at least two further instances of serving soldiers shooting and killing people. A soldier also killed 29 people in a 17-hour rampage in 2020, one of the bloodiest episodes in the kingdom in recent years, and injured dozens more before being killed by commandos.

A debt dispute between the gunman, Sergeant-Major Jakrapanth Thomma, and a senior officer was the cause of that horrific massacre, and the military’s top brass made a great effort to portray the assailant as a rogue soldier.