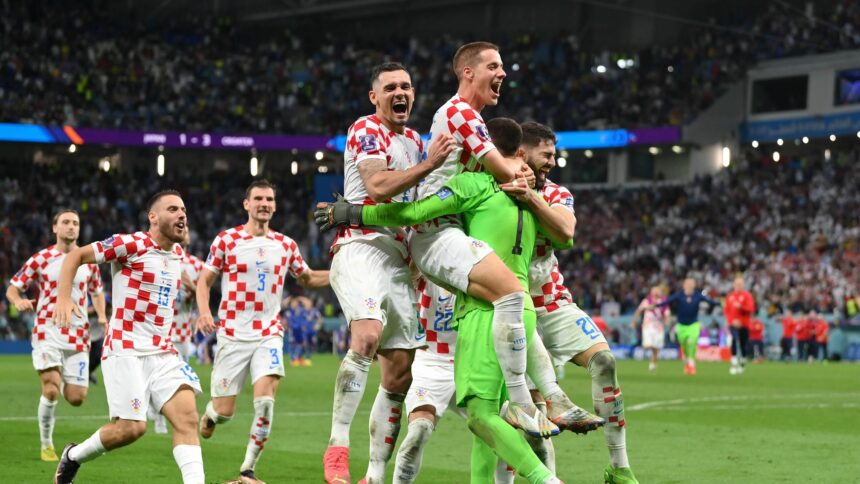 As Croatia and Japan can attest, ingrained behaviours persist. The 2018 champions forced another World Cup match into extra time before defeating a Japan team that was eliminated from the tournament on penalties once again.

Dominik Livakovic, who made three saves in the penalty, was Croatia’s hero. Livakovic made low saves from Takumi Minamino, Kaoru Mitoma, and captain Maya Yoshida during Japan’s penalties, which were equally as awful as the first 120 minutes. Mario Pasalic then successfully converted Croatia’s fourth and third penalty kicks.

Mario Pasalic remained composed and cool throughout the situation. His chance to advance Croatia to the quarterfinals came on the eighth penalty in the tiebreaker. He had witnessed his teammate Marko Livaja hit the post with the last penalty when he was positioned in the centre circle. Pasalic, though, showed no reaction. Shuichi Gonda of Japan dove to his right as Livaja slid the ball to the left and embraced Croat goalkeeper Dominik Livakovic, who had stopped three Japanese players from a distance of 12 yards.

Apart from their ultimate loss to France in Russia four years ago, six of Croatia’s previous seven knockout games at significant championships have gone to extra time, and once again, cool heads triumphed. But here at the Al Janoub Stadium, they did it in absence of their star Luka Modric with the score tied at 1-1 after 120 minutes. The brilliant Modric, who is now 37 and competing in his final World Cup, was replaced eight minutes into the extra session. Everyone on the field was now playing for their captain, notably Livakovic, who just before the first period of extra time ended made an incredible save to keep Kaoru Mitoma from scoring.

On the night before the game, Japan’s seasoned defenseman Yuto Nagatomo invoked the energy of the Samurai, although this was more like hypnotherapy treating insomnia. In the distance, incense was burning. Long before the sad reality of Japan’s World Cup exit at the last-16 stage, who have already seen four such exits, penalties were the outcome of the match.

Croatia also put on a lethargic first half, with Zlatko Dalic’s team displaying symptoms of fatigue in their fourth match of the competition. Japan was able to escape the penalty for several defensive mistakes thanks to their blunted edges. At first, Samurai Blue brought the game to Croatia. After Junya Ito and Wataru Endo worked together to create a well-executed short corner, Shogo Taniguchi fired a glancing header wide. The defender’s response indicated that he should have made contact with the goal after dodging the attention of Dejan Lovren and Josko Gvardiol, the opposing centre-halves.

With Croatia being wary of Japan’s capabilities, the situation had devolved into a game of chess. They defended in numbers and were not overly aggressive with the ball. This team continues to have faith in the lungs-busting endurance of its players; in the group stage, Croatia utilised the fewest players of any team. Japan depends on short getaways, yet they were lacking them. Ritsu Doan, who was given a starting spot after scoring in his team’s victories over Spain and Germany after coming off the bench, combined with Junya Ito down the right, who was outstanding. However, the Croats were able to block off those crosses thanks to their size advantage in the back. Croatia had slowed down to a walking pace, and it appeared that Japan had lost some of its early momenta. However, the Japanese didn’t give up and used their ingenuity and industry to overtake their opponents two minutes before halftime. Doan gave Daichi Kamada a short corner down the right, and after getting the ball back, he whipped in a cross that sparked a fight in the penalty area. Daizen Maeda, who made no mistakes, received the ball thanks to captain Maya Yoshida’s effort.

Japan had earned its lead, therefore Croatia couldn’t afford to take a backseat in this contest. It opened up the second half to be more engaging. Mateo Kovacic missed an early opportunity as Croatia started more determinedly and adjusted the pressure after that and tried to ping crosses into the box.  Dejan Lovren delivered an excellent cross from the right, but Ivan Perisic had a lot of work to do before he could push it past a diving Gonda at the far post. Perisic did this by separating from his defender and finding the strength and position with his head.

After scoring, Croatia pushed harder to secure the victory, but Japan quickly took the lead again, with Wataru Endo’s piercing strike from 25 yards requiring a touch from Livakovic. Modric pushed Gonda into a finger save at the other end. With a quarter of the regular time remaining, replacement Ante Budimir had the finest opportunity. Budimir headed the corner kick from Andrej Kramaric that was eight yards away wide, both defences remained solid, last-ditch tackles flew in, and Croatia once more won a knockout game that stretched over the required 90 minutes.

To eliminate the House of Lords, UK Labour Party promises to win power
Next Article