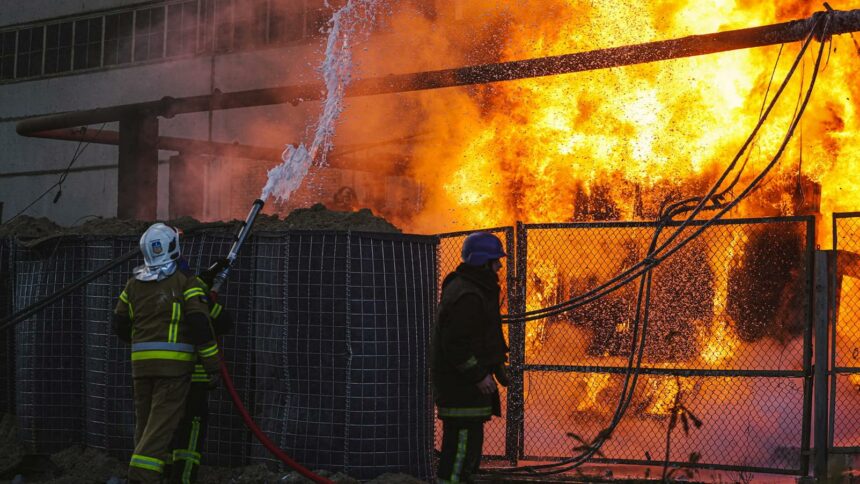 Numerous areas were impacted, President Volodymyr Zelensky claimed, and the local government issued a warning that roughly half of the Kyiv region will continue to be without energy in the coming day. More missiles struck vital infrastructure and residential buildings overnight near the southern city of Zaporizhzhia, according to local authorities. Many areas of Ukraine are currently experiencing snowfall and temperatures below zero, and millions more people lack access to running water and electricity. There are worries that some people could pass away from hypothermia.

On Monday, there were four fatal attacks. Separately, the governor of Russia’s Kursk region stated on Tuesday that an oil storage tank caught fire as a result of a drone strike on an airstrip. No one was hurt, according to Roman Starovoyt. He made no mention of the potential perpetrators of the attack in the Ukraine-bordering region.

The majority of the 70 Russian missiles that were launched on Monday, according to President Zelensky in a late-night video address, were destroyed.

According to the Russian Defense Ministry, the “massive strike using high-precision weapons” struck all 17 of its planned targets.

The regions spanning the length and breadth of the nation were mentioned when he added, “The highest number of shutdowns is in Vinnytsia, Kyiv, Zhytomyr, Dnipropetrovsk, Odesa, Khmelnytskyi and Cherkasy districts.”

He did, however, promise that the government “would do everything to restore stability.” According to Mr. Zelensky, the supply of energy was also compromised in neighboring Moldova, demonstrating that Russia’s actions posed “a threat not only to Ukraine but also to our entire region.”

There have been rumours floating about for a few days that Russia was planning another round of attacks. They finally arrived only a few hours after a massive explosion at two military airfields deep within Russia, which Moscow attributed to Ukrainian drones that Russian air defenses had managed to intercept, Russian defense ministry reported that in the airfields in the Ryazan and Saratov region, three personnel were killed and two planes suffered minor damage.

Russian strategic bombers are based at the two airfields, which are hundreds of kilometers from the Ukrainian border, and have been utilised to launch missile strikes since Moscow’s full-scale invasion of Ukraine started on February 24. Officials in Kyiv were discussing switching from very disruptive emergency blackouts, which frequently linger for many hours, to more controllable planned power outages, which would provide the civilian population with some much-needed predictability.

Since October 10, Moscow has been severely damaging Ukraine’s electrical infrastructure in response to a spate of devastating military defeats.