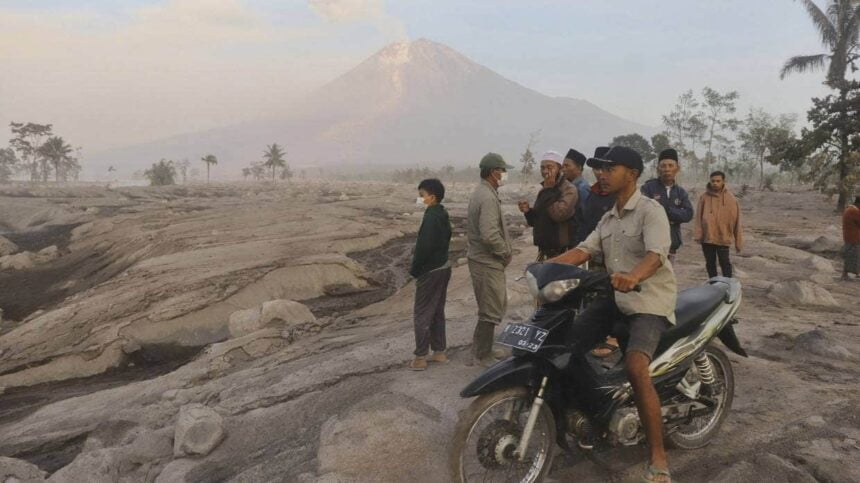 Villages around Mt Semeru were put on high alert as there was volcanic activity observed in the tallest volcano in Indonesia. A radius of 8 kilometers was evacuated and people were brought to safety beforehand.

Rainfall in the area caused the volcanic matter to spew relatively higher than normal on 5 December. The next half of the day was relatively safe as there was less rain due to which some of the effects of lava travelling down were deterred.

The volcano erupted on Sunday causing great damage to nearby fields and villages, including infrastructures such as roads and vehicles which were stranded. The smoke and ash covered the day sky for many hours and following it came to the lava which destroyed valuable commodities along the way.

2500 people fled to safety as the catastrophe struck. Videos shot by residents show the incident and its massive impact on the nearby localities. On average the Indonesian people heavily reside along dangerous volcanoes.

The evacuated residents have been delivered to local shelters, hospitals, and public buildings. Fortunately, no deaths have so far been reported. The number of casualties in such conditions is much harder to evaluate since the affected area ranges to almost 12 kilometers in radius. Rescue teams have been employed in the surrounding areas.

Mount Semeru belongs to the family of the most active volcanoes in Indonesia and around the world. It is more than 12,000 ft high. Indonesia is also included in the Ring of Fire which is a 40,000-mile area shared by several countries bordering the Pacific Ocean and is most notorious for its volcanoes and frequent earthquakes.

Mt Semeru erupted last year as well, moving similar amounts of people to alternate residences. But this year’s volcanic eruption is estimated to be much larger than that of 2021.

Usually, after an eruption of this magnitude, a tsunami follows. There is no evidence of a tsunami yet. However human casualties are fearfully being anticipated. Last year more than 300 people lost their lives due to the eruption.

As additional sanctions against Russia approach, Opec+ maintains its oil production
Next Article