The party leadership has suspended PTI stalwart Faisal Vawda’s membership after the outspoken leader failed to respond to the show cause imposed upon him following his controversial news conference earlier this week.

The decision was confirmed by the PTI on Twitter.

“This refers to the show-cause notice that was sent to you on October 26, 2022, for violating party rules. Within the allotted time, you failed to answer. Consequently, your membership in the party is terminated, “according to the post.

On Wednesday, Vawda claimed the party’s long march was en route to slaughter.

Vawda asserted with conviction, “There will be bloodshed, death, and funerals before and throughout the long march.”

Following his comments, the PTI removed Vawda from the party and said that he would no longer be permitted to occupy any post within the party or speak on its behalf in the media since he had “grossly violated the discipline by giving statements against party policies and guidelines.”

In the news conference, Vawda said: “These funerals will take place, but I’ll fight to the very end to prevent my fellow Pakistanis from giving their lives to a plot planned by a few people. I’ll make an effort to put a stop to the country’s politics of violence and bloodshed.”

The PTI leader, who speaks directly from the shoulder, said that during the long march, both “important and common” people will die. He further claimed that the march to Islamabad was being carried out for “ulterior motives.” 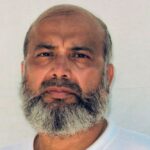 Saifullah Paracha: A Pakistani prisoner in the US for 18 years has returned home
Next Article